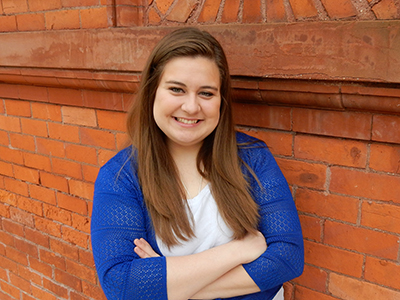 Rachel is a speaker, writer, and trainer with Equal Rights Institute. Rachel graduated in 2017 from the University of Michigan with a Biopsychology, Cognition, and Neuroscience major and Women’s Studies: Gender and Health minor. She was the president of the Students for Life club at the University of Michigan, leading their efforts to educate students on pro-life topics and to advocate for pregnant and parenting students.

Rachel is also a former staff member of the pregnancy medical center, ArborWoman. She formerly served on their Operations Committee and participated as a volunteer in their ministry.

Rachel wants the pro-life movement to be known for its love. “I want us to be courageous enough to speak with charity about abortion. Having a loving approach when presenting a good argument is a sign of strength, not weakness. We cannot allow our anger towards abortion to be directed at those who support its legality. Pro-life people care not just about the unborn, but about all people, and we need them to know that.”

This is what Rachel’s pro-choice friend Amanda had to say about talking to her:

I have known Rachel Crawford for two years; we met through a friend of a friend. In the initial stages of the friendship, we bonded over jokes and busy work that encompassed our classes. However, as time passed and we grew tired of small talk, we pivoted towards more complex topics: specifically, abortion. As a fervent supporter of the pro-choice movement, I was at first surprised by Rachel’s views. Once she told me her stance, I was worried that our friendship would turn bitter from the result of a screaming match (like most discussions are with politics do). Yet, I could have not been more wrong.

Rachel is a person that calmly explains her views and presents them in a logical manner. To be honest, I typically lose all respect for people who are pro-life (once they lament their positions). They usually use reasoning that doesn’t connect with me such as religious views, to argue their stance. Sometimes Rachel will use her religion as a point, but it is never the focus of the argument, which I find highly commendable. Rachel is the only pro-life supporter that I have met that I didn’t want to strangle after a conversation. I have the utmost respect for her.

November 2019: The Transformative Power of the Sidewalk Counseling Masterclass

Summer 2019: Updates From the ERI Office